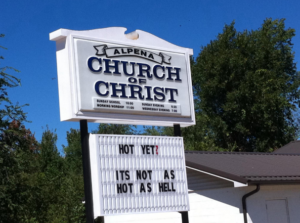 You may be familiar with Daniel Kahneman’s work. He is a psychologist but holds a Nobel prize in economics for a lifetime of work that he did with the late Amos Tversky. One of their important contributions to the field of psychology is the demonstration that loss aversion is a much stronger human tendency than acquiring gains. To put it another way, if you want to be successful influencing somebody to do something, you have a much better chance by telling them what they lose by not doing it than by telling them what they gain by doing it. In fact, by some accounts loss aversion is said to be about twice as powerful a tendency as acquiring gains.

Framing in religion: “Have you heard the good news?”

Most of us, at least in America, have had evangelicals knock on our door to “spread the good news.” But if you notice, they usually spend a great deal more time on the consequences of not accepting some belief than they do “good news.” I think that what most people describe heaven to consist of sounds, even to most people, to be a bit boring: white robes, holding hands, singing church songs, etc., albeit with pearly gates and streets of gold. But even offering a much more desirable description of what heaven might be like instead of the way I have described it is still less likely to convert non-believers than any description of hell I am aware of (torture, fire, “gnashing of teeth,” etc). This follows the training I went through as a kid raised in church. As one man I knew used to put it: “You have to get them [non-believers] lost before you can get them saved.” We were taught to begin by explaining that they were sinners and were headed straight to hell before offering any good news.

In sum, the evangelicals appear to have learned through trial and error what Kahneman and Tversky’s research has shown about loss aversion. This way of framing the sales pitch not only seems to explain much of the spread of Christianity but, at least to some extent, maybe the spread of most religions. “If you don’t accept my religion you will burn in fire for eternity” instead of “If you do accept my religion you will get to wear a white robe, hold hands, sing songs (and see pearly gates and streets of gold too).” To give a non-evangelical example: “If you live a bad life, you will reincarnate into a less-desirable species” would likely be a much more successful marketing campaign for a religion that teaches reincarnation than would be “If you live a good life, you get to reincarnate into a human again.”