For the very fortunate breed of travelers that finds him or herself in one country after another on a regular basis, it is essential to make the best use of technology in order to maximize efficiency. I have spent the past couple of years exploring the best iPhone apps to automate my life. For me, the apps listed here below are the bare minimum to keep my life as an international traveler moving smoothly.

This app is only useful for paying customers of Priority Pass. Priority Pass is a company that allows its customers to use airport lounges around the world – no matter which airline they are flying on. If you fly to the same places all the time using the same airline, you might be better off paying the airline for access to its own lounges. However, if you find yourself flying on a multitude of airlines around the world and do not wish to spend your 8-hour layovers waiting at the gate or in a food court somewhere, you will want Priority Pass. Trust me; it’s beautiful.

With the Priority Pass app, you can push the “Find Nearest Lounge” button, and the app uses your iPhone’s GPS to find the lounges that you have access to at the particular airport that you are at. I’ve been in situations in which I found myself at smaller regional airports in countries like Brazil and China. It didn’t matter! Priority Pass still had lounges for me to use in those airports!

Here is a link to 10% off your first year of Priority Pass – no matter which membership plan you choose.

If you are among the rare breed of culture warriors out there, you should already be aware of Professor Geert Hofstede’s work on the dimensions of national cultures. For international businessmen and businesswomen, the Hofstede index is an indispensable resource. It breaks down cultures of many countries around the world into the following dimensions: Power Distance Index (PDI), Individualism versus Collectivism (IDV), Masculinity versus Femininity (MAS), Uncertainty Avoidance Index (UAI) and Long-Term Avoidance (LTO). Newer dimensions added to the Hofstede index (not in this app, unfortunately) are: Pragmatic versus Normative (PRA) and Indulgence versus Restraint (IND).

Let’s say, for example, that you are an account manager for the company your work for and will be meeting with a new buyer of your company’s product in Country-X for the first time. The purpose of the meeting is to negotiate future terms between both companies. If Country-X happens to score high on Hofstede’s Power Distance Index (PDI) dimension, you can expect that it is less likely that you will have access to the owner or other high-level decision-makers of the foreign company (since you are an account manager – a lower position than an owner in corporate hierarchy). This is cultural intelligence at its finest. If you frequently travel to a diverse range of countries (geographically, linguistically, ethnically, religiously) I highly recommend this app!

There are many books that I could also recommend here that have been instrumental in my personal development in cultural intelligence, but if I had to recommend only three they would be the three below. In some ways they overlap with information, however, the countries they cover vary. So if you travel just about everywhere you will find it beneficial to keep all three in your library. The first two books below dedicate each individual chapter to the cultural and business practices of specific countries (every chapter is a different country). The latter concentrates more on cultural and business practices of geographical clusters (Middle East and North Africa, for example) as well as provides specific information for a few key countries.

I tried at least three of the world clock apps before falling in love with this one by Orlin Kolev. The World Clock is able to not only track the time zones in the individual cities of your choosing, but it even works with your Google Calendar.

Let’s say that on a particular date and time you have scheduled a conference call with a customer in Ghana, but on that date you will be in Bangkok, Thailand. With The World Clock you can enter the date and time that you told your customer in Ghana you would call him, and the app shows you what date and time the appointment will be in Bangkok. You can then choose to setup a Google Calendar event right from the app along with alert reminders so you don’t forget to actually make the call!

Note: While gathering the necessary links and information to produce this blog post I ran into a competing app that looks quite good called World Clock Pro.

Documents can open all of your Microsoft Word and Excel documents and allows you to edit them, organize them in folders, send them as email attachments, back them up on Dropbox and more. It can also open other major file formats, such as PDF. It’s simple. Without it, an iPhone is limited to the Notes app, which is as plain as Microsoft Notepad.

With this app I am able to work on the go.

I experimented with two or three competing apps before choosing this one. The first one I tried was by XE, only because XE is popular in FOREX. Unfortunately, the XE app bombards the user with ads and does not have some of the other options I appreciate from Currency Converter HD.

Currency Converter HD’s nifty calculator also saves you from having to open the iPhone’s Calculator app in order to do a calculation after converting the currency. Like other competing currency exchange apps, this one updates the latest conversions frequently and automatically as long as your phone is connected to the internet and the app is running. 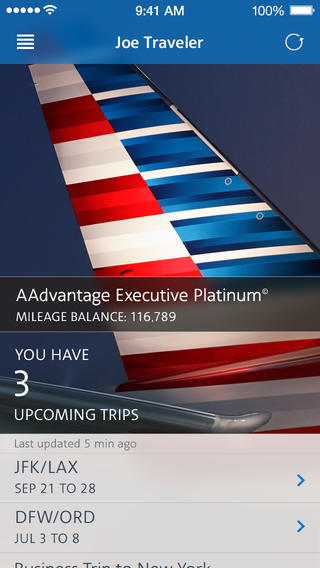 When I am flying with American Airlines or other member airlines of the oneworld alliance, I often open this app as soon as the plane lands to see if my next flight’s departing time or gate number has changed. (The app can notify you if there are flight changes!)

When I am flying with Delta Airlines or other member airlines of the SkyTeam alliance, I sometimes open this app as soon as the plane lands to see if my next flight’s departing time or gate number has changed. (The app can notify you if there are flight changes!)

When I am flying with United Airlines or other member airlines of StarAlliance, I sometimes open this app as soon as the plane lands to see if my next flight’s departing time or gate number has changed. (The app can notify you if there are flight changes!)

I discovered this app while researching for this blog post and was looking for a better app to recommend than the world factbook that I had been using. I am impressed with this one.

When connected to the internet the apps can zoom in even closer. Other than maps, it has information on each country such as: languages spoken, economic and government data, major holidays, religions practiced, information on major cities within each country and more. It even has a currency converter tool (but no calculator built in). I’m sold!

If I had to choose only one app it would be this one. How else am I supposed to pass the time?

Read more here for my thoughts on audiobooks.

If you do business in the Muslim World, you’ll want this app. It is always helpful to know when the prayer times are in each country so that you can setup appointments without interruption. I once had an international guest from Morocco visit me in the USA. He told me that on Friday of that week he wanted to go to the local mosque and pray. I opened the Athan Pro app, typed in the local zip code, and I instantly had all the prayer times at my fingertips. Later I called the mosque to verify that the time was correct. It was spot on.

Sometimes you’re in an international airport, and all the available WIFI signals are either blocked, or to use them, you would have to go through the annoying hassle of entering your credit card number and personal information. Skype WiFi bypasses all of that. If you have a Skype account (which you should!) you can simply use your Skype credit to connect to connect to the WIFI networks that require payment. Connection times are in 30-minute intervals.

If you’re an international road warrior or at least speak a foreign language you are probably already aware of this one. Google Translate is able to translate from any one language to another with more than sixty to choose from. The app requires a connection to the internet.

I recommend the Michaelis Moderno dictionary apps. They are very complete and even come with other features, such as being able to see a full breakdown of conjugations for any verb. For that reason, this particular app is sold for $29.99. It was well worth what I paid. Michaelis Moderno dictionary apps require no connection to the internet and give all possible alternative translations for each word; Google Translate, by contrast, only gives a single, best guess translation.

This is the #1 app that you should have for all communication while abroad. You can call anywhere in the world for free (if the person you’re calling has a Skype account) and can call telephones for only a few cents per minute.

But you’ve probably been using Skype for years already, so keep reading…

To me, Viber is just another app for chatting since it has all the same major features as Skype and WhatsApp. But if you have business partners and customers around the world, at least some of them will be using it, so it is very useful to have.

WhatsApp is just like Viber. If you’ve got a wide range of friends and business contacts, you should probably have this app too.

No doubt you’ll hear music while abroad, and you’ll want to identify the artist and song title. SoundHound is a free app that can listen to the music in the background wherever you are and then look up the artist and song title for you. If you have no connection to the internet where you are, no worries… SoundHound can temporarily store the recorded audio clip and try to locate the song for you later once you’ve reestablished an internet connection.

Full disclosure: Although SoundHound has access to a giant database of all sorts of music, I’ve noticed the app is better at identifying more mainstream music. Don’t be surprised if it cannot recognize, let’s say, a Turkish song that hasn’t yet made it to international radio stations.

I also refer frequently to the following resources:

*If you know of an app that deserves to be on this list you may leave a comment below or email me at emileaphaneuf (at) gmail.com. I am also looking to produce an equivalent post to this one for Android and Blackberry. If you have international travel experience and a number of favorite apps for smooth travel for either the Android or Blackberry platforms you may also contact me.