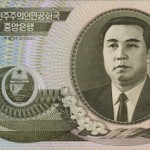 A friend of mine recently sent me this Reuters article by Daniel Tudor and James Pearson about the illegal but tolerated market economy behind North Korea’s own “iron curtain.” Among a few of the topics covered in the article (and the book by the same authors) they reveal several of the North Korean government’s attempts to restrict voluntary trade in North Korea via manipulations of the won (KPW) currency. What I found interesting was the discrepancy between the official government-set exchange rate (only 96 KPW per 1 USD as of the time the article was published) and the market exchange rate (closer to 8,000 KPW per USD, again, as of the date the article was published).

Another case, according to the authors, involved the government canceling the last two zeros of every bank note. The government did this by requiring citizens to trade their 1,000 won notes, for example, for 10 won notes. North Koreans were allowed only one week to make the trade. One of the catches was that the government would only exchange a maximum of 100,000 won (about $30-40 at the time). The result? The savings of North Korean people were destroyed instantaneously. Remaining monetary notes stored away in savings became worthless because by law, no merchants would be allowed to accept them. For a North Korean to demand that the government trade in more than the 100,000 won maximum would likely result in that individual being subjected to intense questioning about any black market activities he or she may be involved in. “Where did you get this extra money?! You must be doing something illegal! Off to the labor camps for you!”

Obviously, making any rational economic calculation with these money prices is difficult to say the least. And in an oppressive regime that does everything it can to discourage market activity, that almost seems to be the government’s intention. Under these conditions, if there is any rational economic calculation at all it is only thanks to the black market! If people cannot rely on money to not lose its value drastically overnight, they will try to sell it as soon as possible for other currencies, consumer goods, etc. It is for this reason, that North Korean people (illegally) trade US dollars and Chinese yuan on the black market. Similarly, when people notice the discrepancy between government-set exchange rates (which are only government attempts to conceal just how bad inflation is) and market exchange rates, they will choose to buy and sell at market rates — not government-set rates.

Related note: Inflation also has a strong tendency to encourage spending and consumption over saving. During hyperinflation in Brazil in the 1980s and early 1990s, Brazilians frequently ran to the markets to sell their money (by buying goods and services) as soon as they received their paychecks. Holding onto their money for even an extra day often meant that their money’s buying power decreased dramatically. The increase in demand and seller expectations that demand would continue pushed prices up even further.

The Reuters article gives an example of a basketball for sale at a shop in Pyongyang for 46,000 won. At 96 KPW to 1 USD, the price of the basketball is US$479.17. Obviously, nobody pays this amount of money for basketballs under normal circumstances in any country. Now, by contrast, if the market rate is about 8,000 KPW for 1 USD, we are only talking about US$5.75. But even at this price, one would imagine that most poverty-stricken North Koreans without political connections would prefer instead to use their money to purchase goods and services that are more essential to maintaining human life. To switch from economics to psychology for a moment, I’m referring to goods and services that are able to serve functions further to the bottom of the triangle in Maslow’s hierarchy of needs (i.e. physiological needs such as water and food).

My curiosity led me to check XE.com to check the exchange rate between KPW and USD. Here below was the rate shown on 16 April, 2015. I updated the page 2 hours later, and the rate was still exactly the same. For any other currency (belonging to nation states with more formalized market economies), XE.com is able to provide updated rates as they fluctuate throughout the day. This is the relevant portion of the screenshot I took from the page on that date:

Today, two weeks after getting the above exchange rate, XE.com reports it to be 124.753 KPW for 1 USD. (That’s “one hundred twenty-four point seven five three” for my friends from countries that have the opposite usage for commas and periods than that of the United States — not “one hundred twenty-four thousand seven hundred fifty-three”). My guess is that XE.com is reporting North Korean government-announced exchange rates since 124 to 1 USD doesn’t seem too high relative to exchange rates with many other countries.

I also checked the rate using “Currency Converter HD” iPhone app, which is the app I rely on for all other currencies as I travel, and found this very different exchange rate. Today again, two weeks after I first checked and finally got around to writing this blog post, the app still says that 1 USD is valued at 900 KPW. I also find it difficult to believe that the going exchange rate is perfectly divisible by 100! 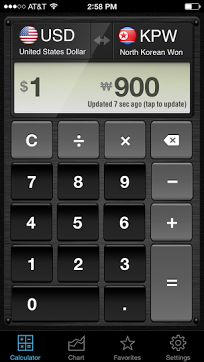 As of 1 May, 2015, Google reports the same exchange rate as my iPhone app: